An Abridged History of the 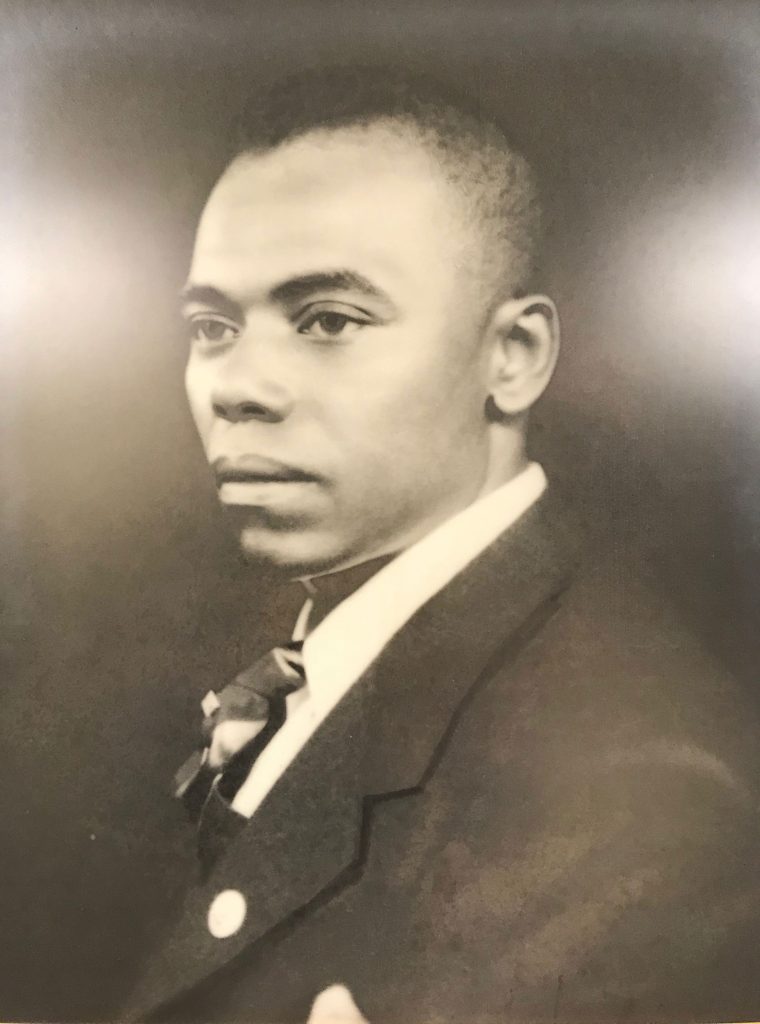 The Stronger Hope Baptist Church exemplifies a strong Baptist, Biblical, fundamental preaching and teaching ministry. For eighty-one years the congregation has served the spiritual and Christian educational needs of metropolitan New Orleans and other areas of the state.

In 1937 the Reverend Jessie James Carter, Jr. led thirty-nine persons in a solemn candlelight march from 2915 Thalia Street, the home of the late Mr. and Mrs. Horace and Elizabeth Scott, to 2401 South Galvez Street. As they marched the group sang the old Negro Spiritual, “I Opened My Mouth unto the Lord, and I Won’t Turn Back.” After assembling in the building the organizational meeting was begun. Reverend Carter asked the question, “What shall we name the new church”? Sister Isadora Carter moved that the new name would be “Stronger Hope Baptist Church,” because God had given them a stronger faith and hope. The acceptance was unanimous.

The church grew in Spirit and numerically. Pastor Carter had outreach evangelistic emphases and frequent revivals. People were being saved and inspired through the Sunday school, Baptist Training Union, the Woman’s Missionary Organization, Youth Training and Fellowship Programs.

On March 4, 1946 the old building was demolished and construction of the new edifice began. The congregation continued worship services with a sister church in the community, the New Home Baptist Church. On April 13, 1947 they returned to a beautiful new white stucco building costing a total of $42,000.00. The church continued its onward and upward struggle in the war against sin, poverty, and social injustice in economics and education. Many souls were added to the church and the name of Jesus was lifted throughout the community. A radio broadcast ministry was begun furthering the outreach of the gospel. 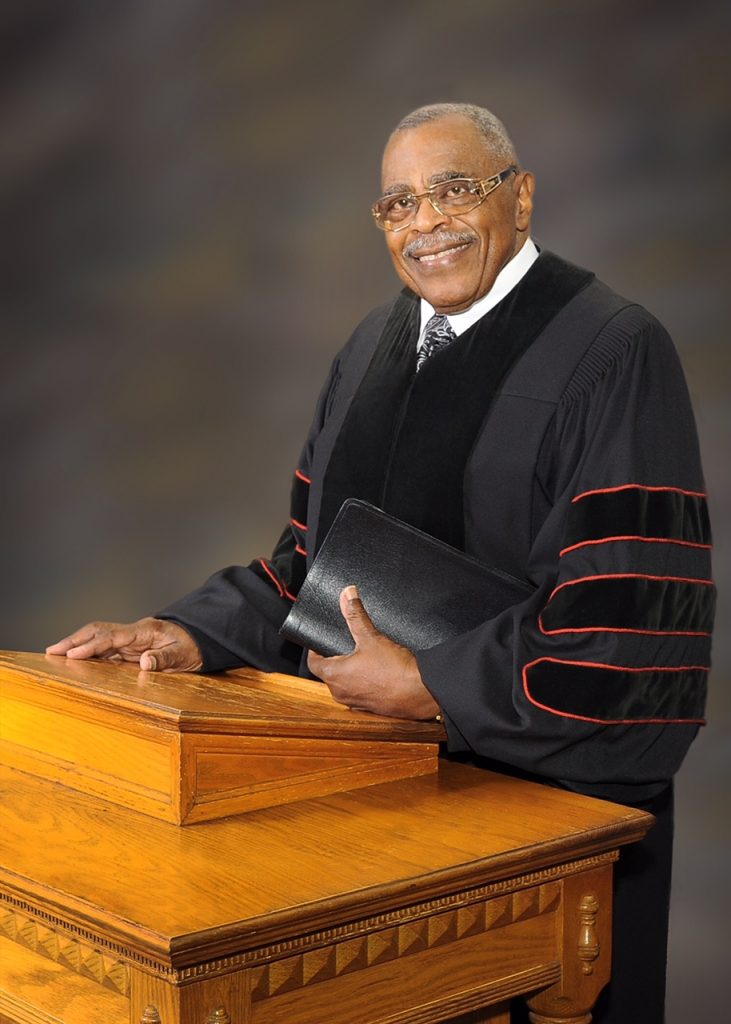 On October 10, 1964 Reverend Jessie James Carter was summoned to be with the Lord.

The church remained strong and drew closer together in love. Mourning for their lamented pastor lasted for seven months.

The Stronger Hope family remained steadfastly in effectual and fervent prayer as they sought a new leader. God stated in Jeremiah 3: 15 “I will give you pastors according to mine heart, which shall feed you with knowledge and understanding.” The work he had begun in Kingdom building here on earth was to be continued by a young public school teacher and Minister of Youth at the Austerlitz Street Baptist Church, the Reverend Joseph Clifford Profit, Jr. He preached his first sermon on Sunday, December 6, 1964 at 6:00 P. M. during the observance of the Lord’s Supper. He was officially elected as Pastor on Wednesday, June 2, 1965.

Upon assuming the leadership of this great congregation Pastor Profit chose a theme for this local ministry “The Word of God Lights Our Way” based on Psalm 119:105, “Thy Word is a lamp unto my feet, and a light unto my path.”

He began to toil with Christian Educational development to include: Leadership Training Workshops; Church Membership Training Week, under the auspices of the Baptist Training Union; A Bible Study Institute; A Continuing Education Program, granting high school diplomas; An Annual Religious and Educational Tour throughout the United States and abroad; Christian Education Week, under the auspices of the Sunday school; A Youth and Young Adult Male Retreat; Stewardship Conferences and other ac¬tivities as the need would arise. Evangelistic projections and Missionary endeavors took top priority on the annual calendar. 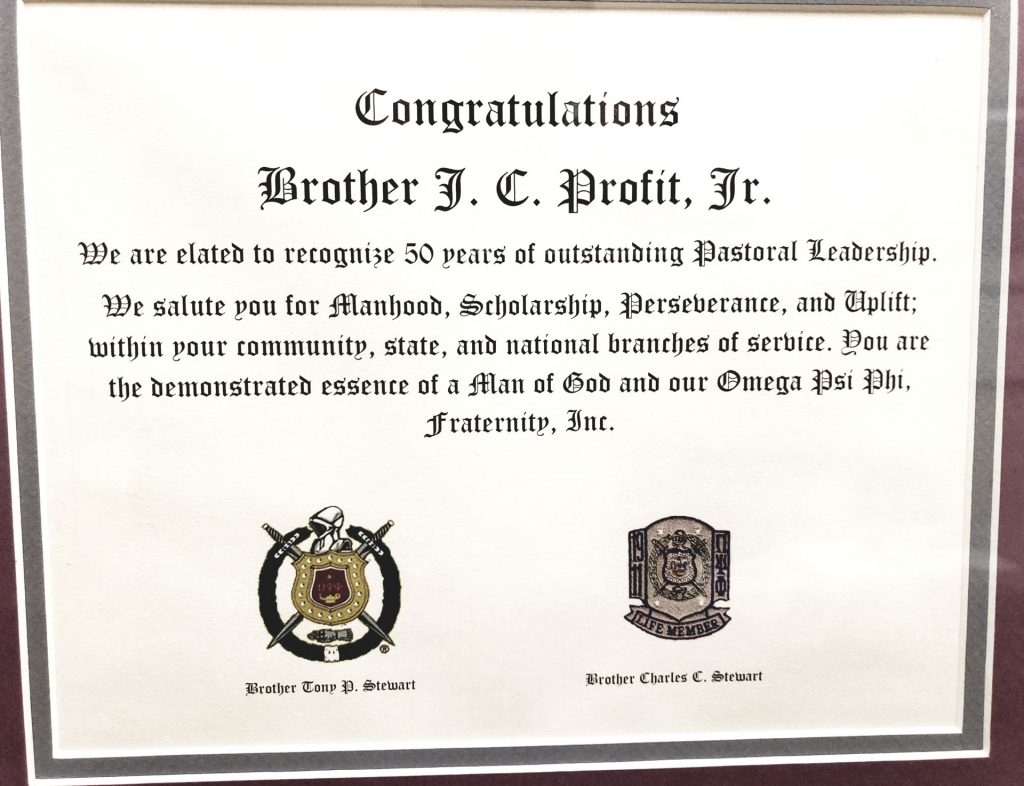 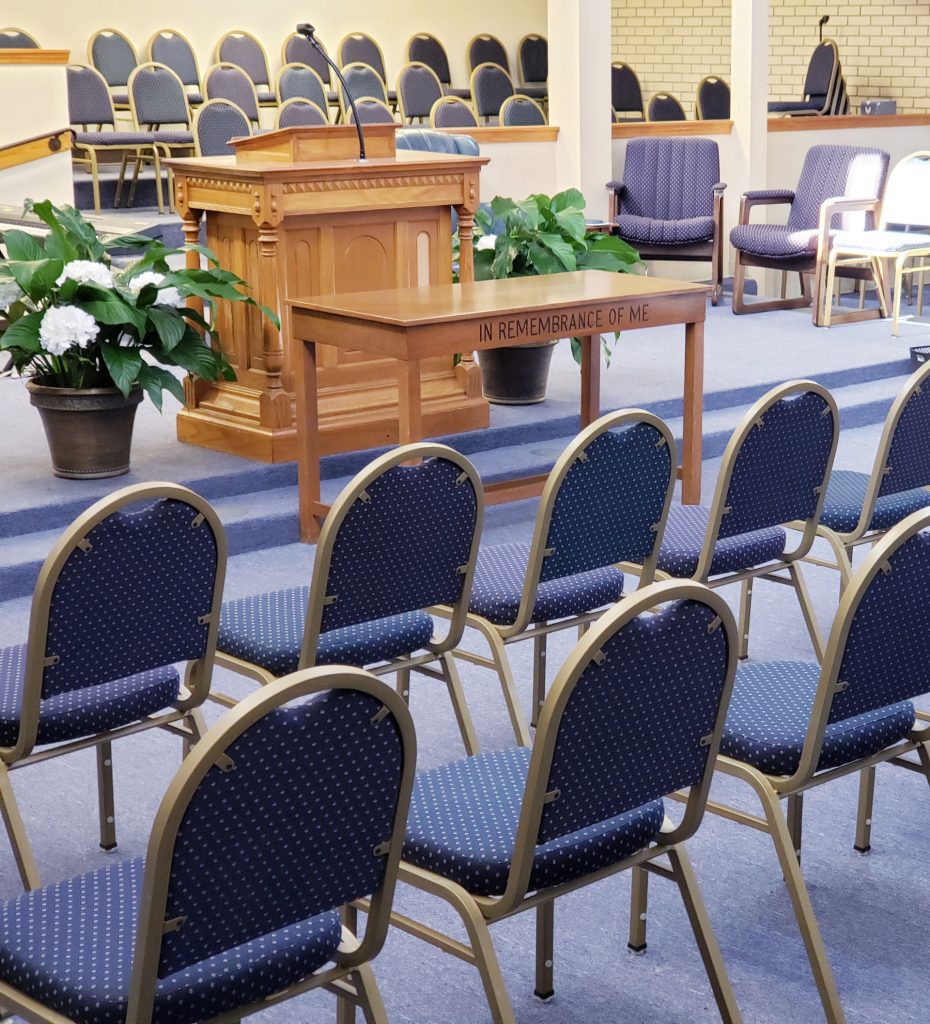 the Reverend Emanuel Smith, Jr., Pastor. After a period of time, we relocated to the Israelite Baptist Church Annex at 2200 Terpsichore Street. We continued to worship at 11:00 A. M.

The congregation grew in number and began to dream, hope and pray for the erection of a new facili¬ty to house the programs of Christian development. Funds were raised and new properties were acquired for this new project. In August, 1974 a huge 60 x 60 feet tent was purchased and erected at Simon Bolivar and Josephine Streets to house the congregation while the erection of the new Stronger Hope was under way. On August 1, 1976, the congregation marched from Simon Bolivar and Josephine to the new edifice at 2401 South Galvez Street. The church continued emphasizing a sound gospel preaching ministry, and a fun¬damental Bible-based teaching ministry through weekly Radio Broadcasts and bi-annual Television productions.

In August 2005 Hurricane Katrina totally devastated the Stronger Hope Baptist Church. The membership was displaced across the United States. On Sunday, December 4, 2005 we began to observe worship at 1:00 P. M. at the Israelite Baptist Church located at 2200 Martin Luther King, Jr. Boulevard,

We kept the faith and on Sunday, March 9, 2008, at 10:00 A. M. the congregation gathered for prayer and praise at 2200 Terpsichore Street. A police escorted motorcade traveled to 2401 South Galvez Street to a “New” Stronger Hope Baptist Church. Special guests were Dr. E. B. Burroughs and the congregation of Cherry Grove Baptist Church from Darlington, South Carolina, and Dr. Magdalene Womack of the Piney Grove Baptist Church from Decatur, Georgia. During the 11:00 A. M. worship on each first Sunday of April, May and June of 2008 the ordinance of baptism was observed.

June 29, 2011, the roof caved in within the sanctuary. This lead to a “Raising the Roof” effort. The congregation continued to worship in the sanctuary until the roof was raised again! 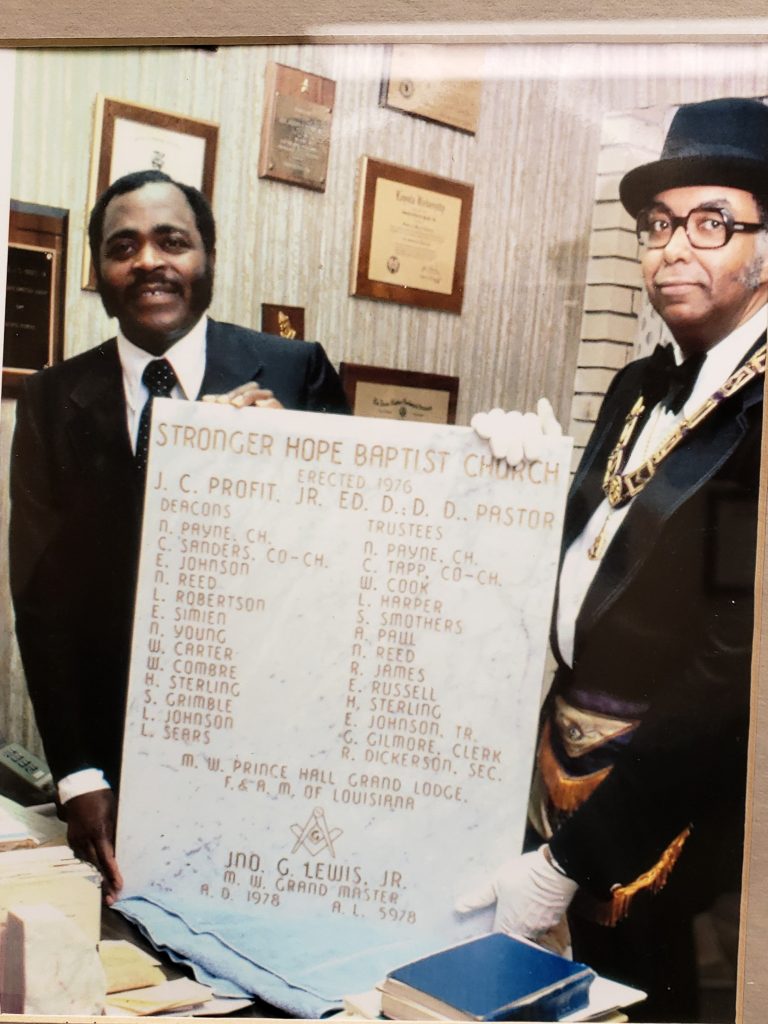 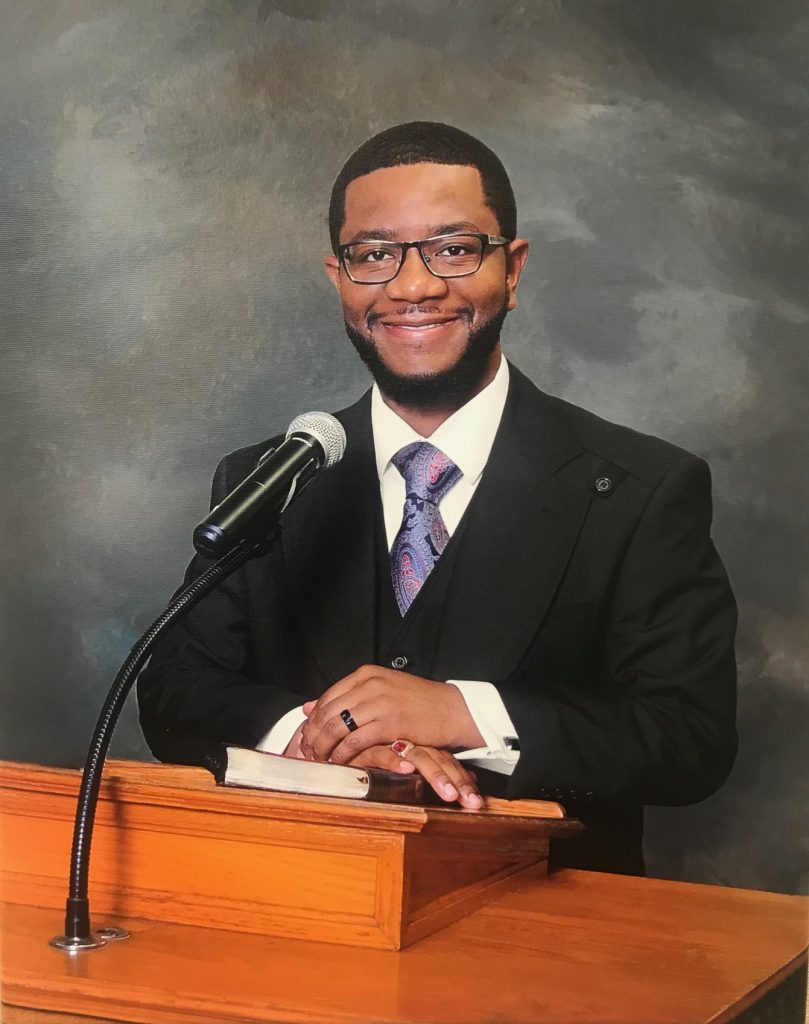 His work on earth was done. His race for heaven was won. The membership grew closer together as they mourned their late and lamented pastor. They remained steadfast in fasting and prayer.On January 2, 2016 a Pastor’s Search Committee was formulated to seek God’s face as He sends a pastor according to Jeremiah 3:15 “I will give you pastors according to mine heart, which shall feed you with knowledge and understanding.” During the month of February 2017, three candidates were presented to the congregation as they continued to wait on the Lord.

On Friday, May 26, 2018 an election was held. Reverend Nicholas Kevin Derouen, God’s Ecclesiastical giant was selected. He was installed on Friday, September 22, 2017 under the auspices of The Ideal Missionary Baptist and Educational Association, Incorporated, Reverend Dr. Joseph Clifford Dyson, Sr., President.

Just like his predecessor, Dr. Profit, he stands tall and with much stamina, very deliberately and very meticulously proclaims the Word of God.

The Word of God Lights Our way!